Racquetball is a fast paced sport played with standardised equipment with specific court dimensions worldwide. The sport which was invented by Joe Sobeck in the United States became popular during the late 1970’s and early 1980’s because it was fun, easy to learn how to play and it is one of the best workouts you can get in a short period of time.

Racquetball can be played either on an indoor or outdoor court with anywhere from 2 to 4 players at a time. There are various governing bodies for the sport that provide on-going leadership worldwide.

Indoor racquetball is played on a 20′ X 20′ X 40′ court that has four walls, a ceiling and a floor, all of which are used during play. Players will say that the fact than you can “play the ball” off of any wall anytime during the rally is what makes racquetball so fun right from the start.

Lines marked on the floor of the court define the service and receive areas and have been given names called the “Service Line,” the “Short Line” and the “Receiving Line.” The walls are also given names called the “Front Wall,” the “Side Wall,” and the “Back Wall.” Rules apply about these areas, lines and walls and where players may position themselves during actual play. 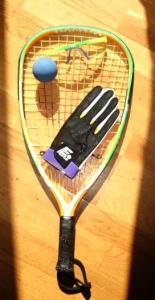 The ball used to play the game is air filled, about three inches in diameter, and has a lively bounce. The racquet used is a fixed frame with strings and has a grip at the end for players to hold securely during play. Safety glasses (eyewear protection) are worn to prevent eye injury. Indoor runners, socks, shorts, T-Shirts, wrist bands and head bands are generally worn during play.

There are many 40x20x20 courts in Ireland, many of which already are used to play handball. In most of these, it is permitted to play racquetball but please check with the owners. Once you find a club or a court and have the basic equipment, get games with as many other players as is possible. In this way you will learn the skills of the game and be able to compete at a higher level.